How to deploy a Laravel application with zero downtime

This guide will walk you through deploying a Laravel application to your server and shows what a simple but very effective workflow looks like.

Because of how Laravel applications work, deploying them using the SSH strategy is much preferred in comparison with FTP. Using FTP is possible, but for this guide we’ll assume you have a (shared) host or server with SSH access enabled.

Let's automate your deployment process for your Laravel projects!

Launchdeck is an automated code deployment tool that allows you to easily deploy Laravel to your server. You can write configuration files, define custom commands and deploy automatically whenever you push. 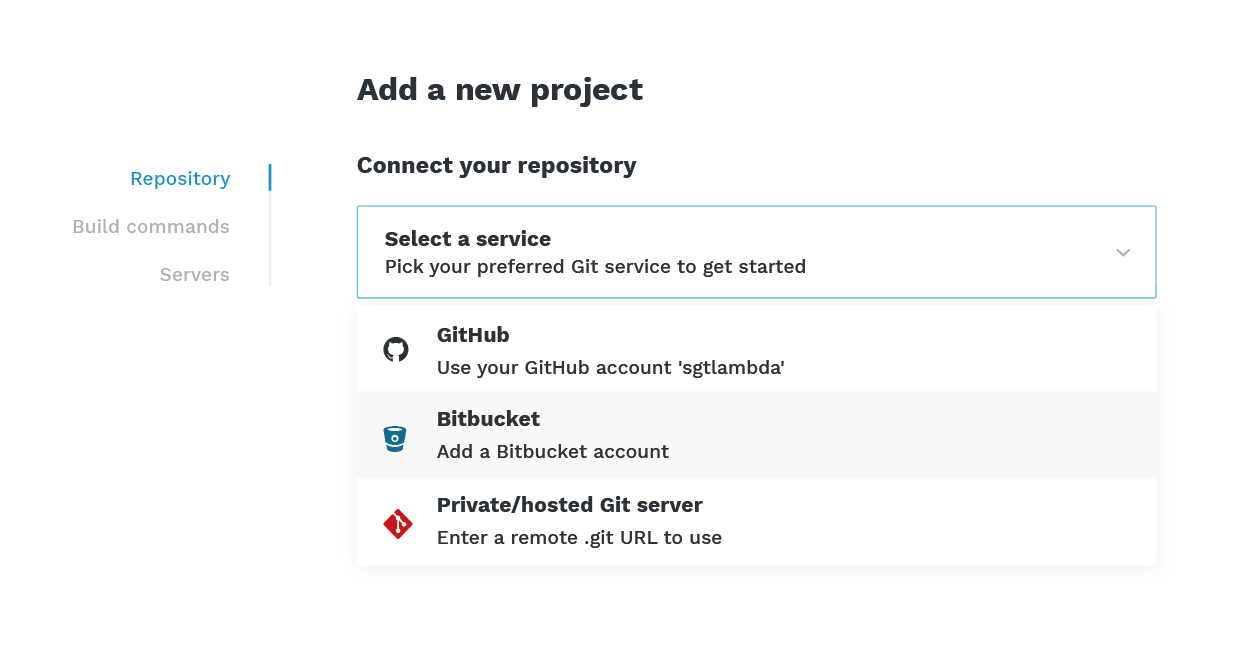 The next step allows us to define commands which will be executed in an isolated docker container - this is the build step. Hit the button “Auto suggest build automation” and we will automatically suggest a build config based on the contents of your repository - your Laravel project.

With a basic Laravel set-up Launchdeck will suggest the following build commands. Note that there also is a input and output file specified. This will be used to cache the node_modules folder and prevent you from installing the dependencies from scratch with every deployment. This will save you a ton of time!

Purge
All files generated using these build commands will be uploaded to your server, except for the directories and files specified under purge. This is a list of globs to be “purged” after the command runner stage has completed. In this case, Launchdeck deletes the directories specified before sending the build off to your remote server.

Shared
With our Laravel project there also be some files and folders that need to be persisted throughout builds, think of your Laravel cache and sessions. 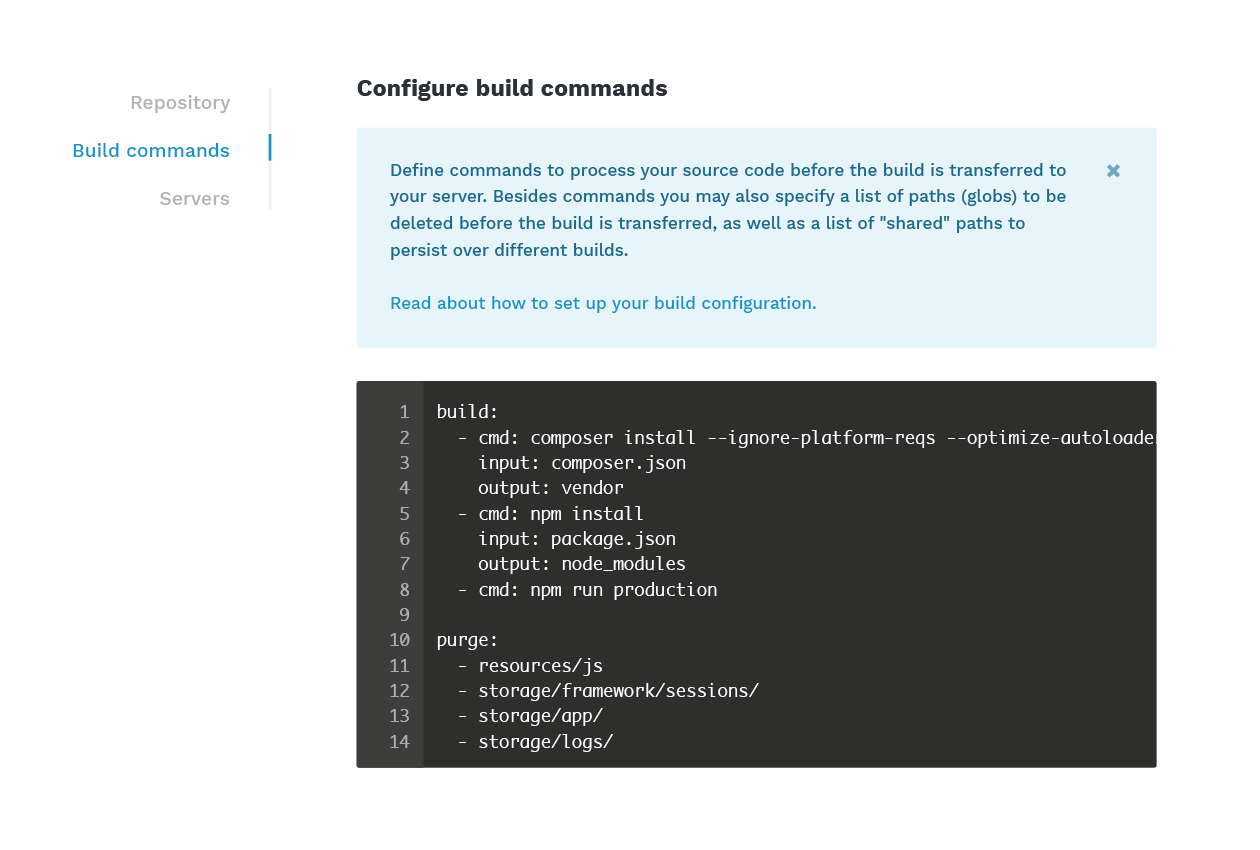 Now let’s tell Launchdeck where to upload your Laravel application. In this example, we’ll upload the Laravel files to your server using SSH.

A major advantage of SSH is that it allows for commands to be executed on your server, including the creation of symlinks. This enabled Launchdeck to publish new versions of your project without any downtime at all. The way this works is by adding an entirely new directory for each new version, to which a symlink from your server’s webroot will be created or updated once you wish to publish this new version. Find out more on how zero downtime atomic deployments work.

For security, we recommend creating a separate user to use for deployments.

How to configure your server can be found in our SSH server configuration docs.

Make sure the 'Webroot path on repository' field is filled in with the value 'public', so this path within the repository would be linked to the webroot on your remote server. 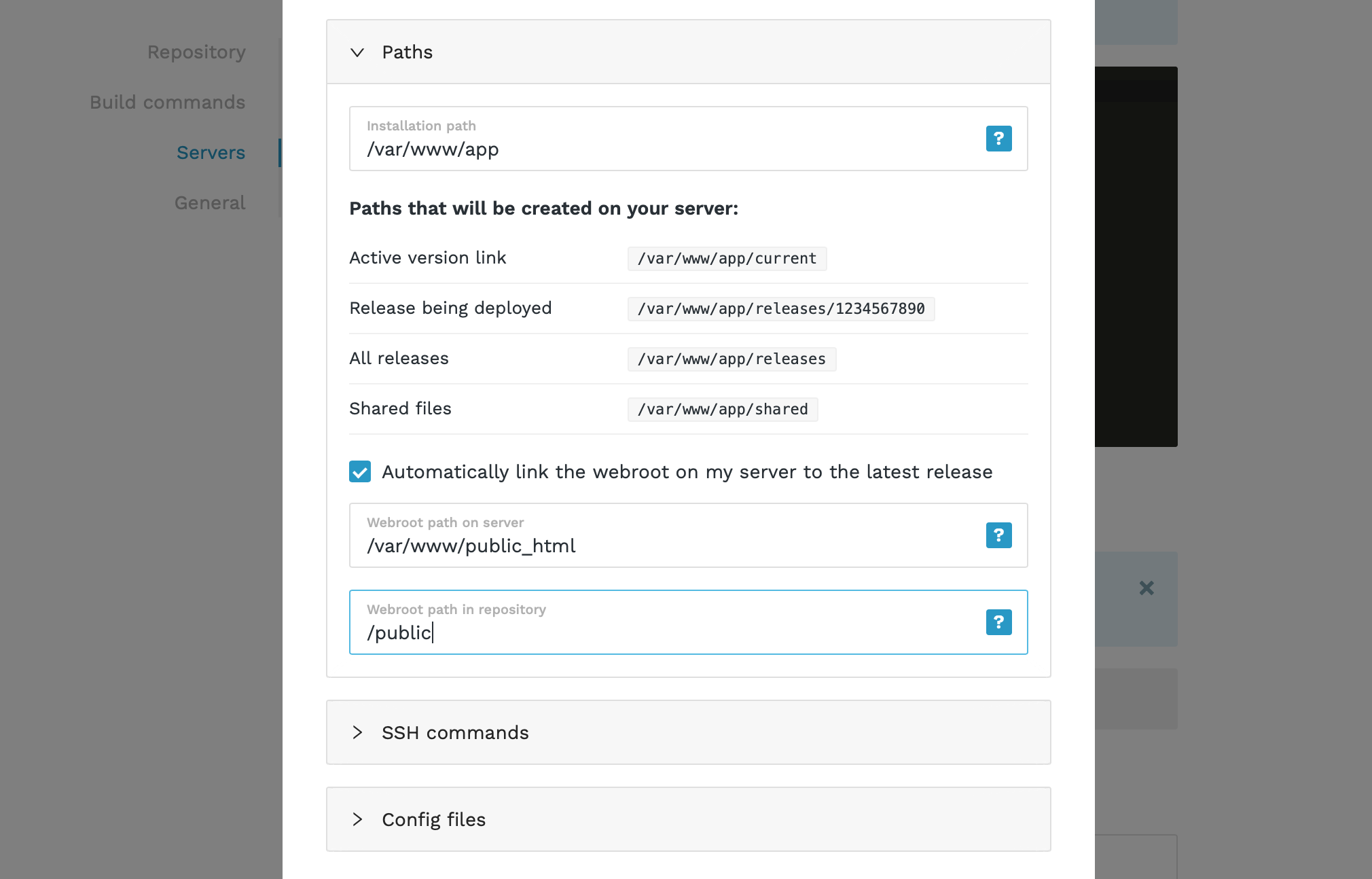 In addition to the build commands, we also need a number of Laravel commands that are executed on your server after every deployment.

Within the server configuration modal you will find the SSH commands editor. In the 'After publish' tab you can add the following commands, one command per line.

The --force flag is simply used to bypass the confirmation prompt. 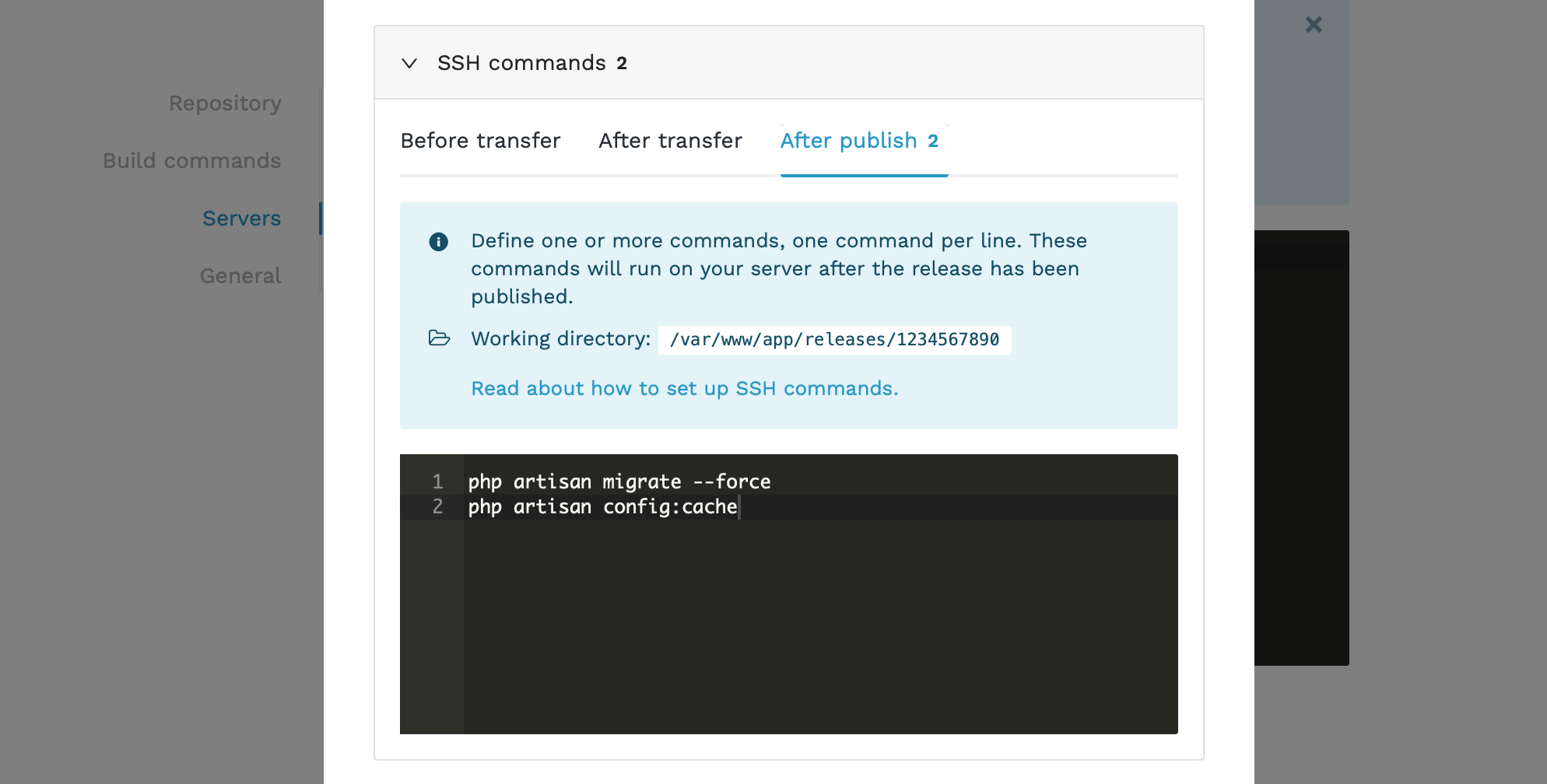 The last step in the server configuration modal is adding the configuration file, which contains sensitive data such as the database credentials. You want this file to be uploaded during deployment, but not tracked in version control.

In your Laravel project this is the .env file. Create the file in the config file editor and copy the contents from the .env.example and paste it into the config file content field. Adjust the values and then close the server configuration modal by pressing the 'Save' button. 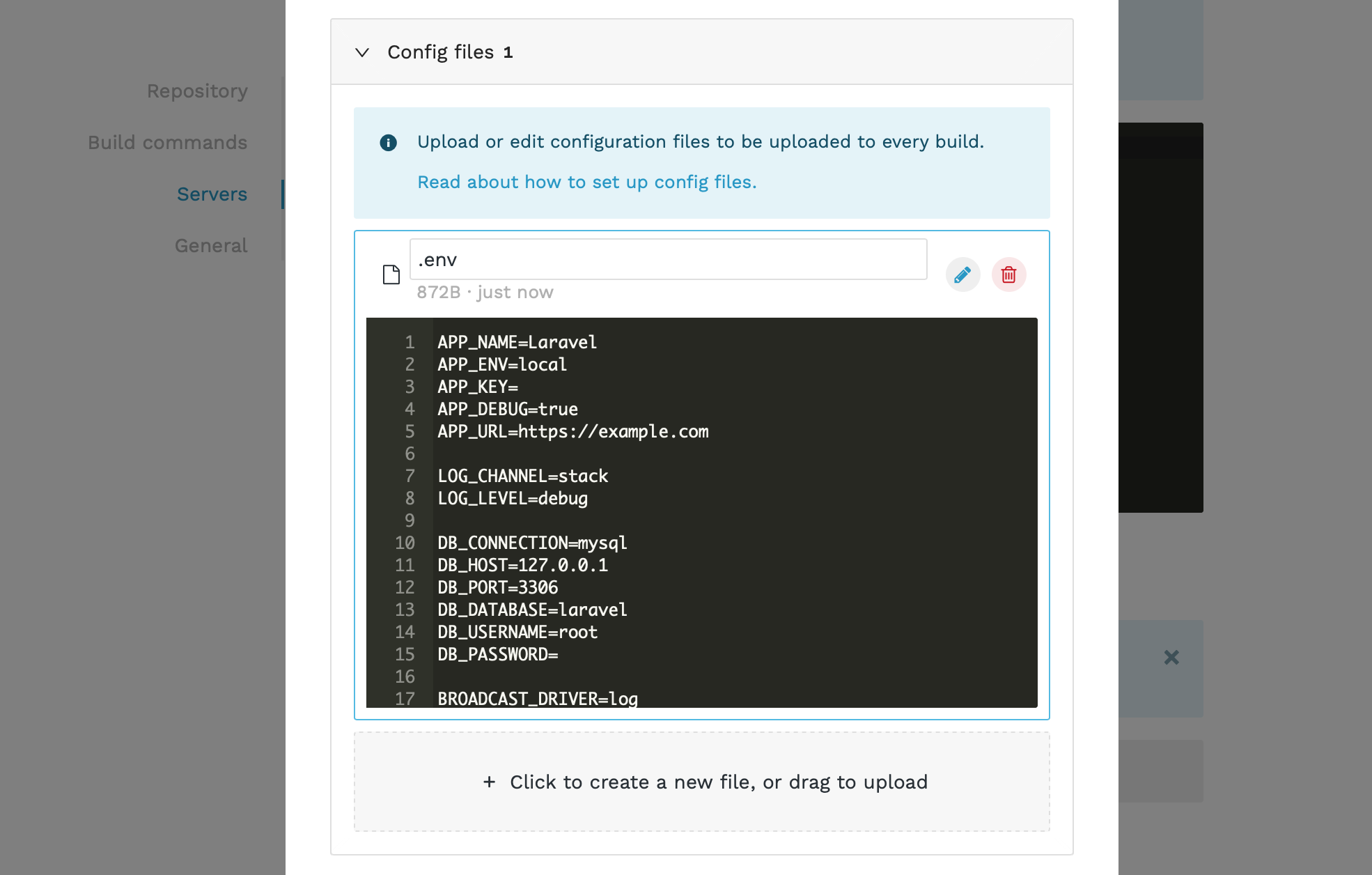 We’re now ready to start our first deployment. Click ‘create new project’ to confirm the settings and add the project. In the project overview, you can now start the build. The code will be cloned from your repository and prepared for you to publish it. Hit ‘Publish’ and your Laravel app is live!

That’s all! By using Launchdeck to deploy your Laravel application, you’ll never have to upload a new version or run commands manually. Just hit “publish”, and Launchdeck will deploy your app with zero downtime.